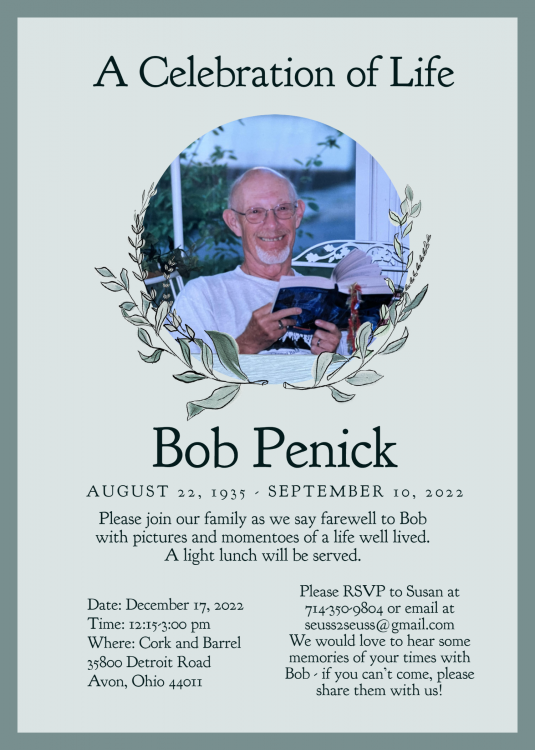 John Robert Penick, age 87, Bob (as he was fondly referred to by those who knew him) left to join Jesus, his parents, Grider and Mabel, and other family and friends. He will be greatly missed by his beloved wife of 62 years, Edie (Thompson) Penick and their children - Jim, Susan Fortier, Tom, Laura Summy, and son-in-law Ron Summy - as well as their grandchildren - Katy and Camron Fortier. He was born in Oklahoma in August 1935 and grew up in a musical, loving family that stressed the importance of education. He left the warm south for graduate school in Minnesota where he met and married Edie. They started their family and all of the kids were born in MN. In 1972, they moved to Kentucky for a few years, before settling in Northeast Ohio. He became a Browns, Indians and Cavs fan and was always hopeful that a hockey team would find a home here too. His love of learning, writing and reading lasted his entire life. After dinner, Dad could often be found listening to classical music and reading about anything from sports to historical events. His love of learning and his inquisitive mind led him to an amazing career with UPI and, later, The Chronicle Telegram. His work took him many places and introduced him to a variety of people. In his later years, he enjoyed retirement to the fullest, spending his time proofing the newsletter for their neighborhood (Avenbury Lakes in Avon), playing bridge, tennis and golf into his 80’s. He ended his battle with Alzheimer’s Disease while at home in Avon, Ohio, surrounded by family. The funeral will be private. A Celebration of Life open to all friends and family will be at the Cork and Barrel in Avon on Dec 17, 2022 from 12:15 - 3 pm. A light lunch will be served.

Please accept my sincere sympathy and prayers for your comfort and consolation. I met Bob at St. John Westshore Hospital many years ago, then at Avenbury when we moved to Avon. His twinkling eyes and dry humor made it a joy to see him in the neighborhood. May he rest in peace, no longer needing to trudge the road of happy destiny.

It is impossible to tell you how important Bob was for me when I started a New Life Style, many years ago.
He was a true Mentor and Guide. A leader always showing the way to a better way of living.
Bob will be Missed by Many. Happy Trails, Good Friend.

Laura, my thoughts and prayers are with you and your family during this difficult time. I did not have the pleasure in meeting your Dad, but I can say, he brought up a wonderful Daughter which says a thousand words on what a wonderful man he was.