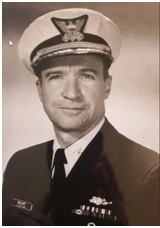 Captain Charles Millradt, U.S. Coast Guard (Retired), 89, died on August 24th, 2022 in Elyria, OH from a combination of pneumonia and rhabdomyolysis.  After being raised in Milwaukee and Green Bay, Chuck graduated from Marquette High School in 1951 and received an appointment to the US Coast Guard Academy, from which he graduated in 1955.  He served 30 years in the Coast Guard, holding numerous land and sea commands until he retired at the rank of Captain in 1985.  His sea commands included the CGCAcacia in Port Huron, in which he provided icebreaking in support of Great Lakes shipping for two years, and the CGCDauntless in Miami, in which he led search & rescue efforts in the Caribbean for another two years.  His land commands included Captain of the Port in Sault Ste. Marie, MI, in which he led the search effort following the sinking of the Edmond Fitzgerald.  Following his service, he became an expert speaker on the sinking of the vessel and the associated search efforts.  Chuck retired in the greater Cleveland area, where he continued his passion for the sea, leveraging any opportunity available to boat or sail.  He also enjoyed ballroom dancing, playing cards, golf and country music.  During his retirement, he continued his life of service as an active member of Bay Men’s Club and by providing Meals on Wheels for more than a decade.   Preceded in death by his first wife Irene and his son Peter Millradt, Chuck is survived by his wife Nancy Millradt, his children Bob (Claudia) Millradt, Paul (Olivia) Millradt and Susan (Jim) McGlone, by his grandchildren Owen Millradt, Lorna Millradt, Andreas Millradt, Hugh McGlone and Claire McGlone, and his partner of 28 years, Charlotte Wetzel.  A Memorial Service will be held at Christ Church Westshore at 32607 Electric Blvd in Avon Lake, OH on Sept. 24th at 10:00 AM.  In lieu of flowers, the family asks that donations be sent to the Leukemia & Lymphoma Society at  https://givenow.lls.org.

I had the distinct pleasure of serving under Captain Millradt when he was Chief, Reserve Division at the 9h District HQ, Cleveland Federal Bldg, 21st fl. This was during those hectic days in the early-mid '80's when the CG was going computer-crazy, which did not make the job easy back then. However, I found the good Captain to be a very approachable and reasonable individual who kept the seas calm during the storm of technology. We had common interests outside of the CG and recall several discussions with him that I normally would not have had with an O-6. With his blessing and faith in me, I was elevated to senior Leading Petty Officer of the Reserve Admin section, a position normally billeted for a Chief Petty Officer, and received the CG Achievement Medal upon transfer. I liked that he had a sense of humor as well. One incident stands out when we had a visitor from the 15th floor Military Enlistment Processing Command who happened to be a young, Army Second Lieutenant, Women's Army Corp, I was helping with some records. My second tour in the Navy was spent at the MEPC so I was familiar with their operation. Captain Millradt happened to step out of his office in the area we were, and upon getting a look at the Lieutenant, he had this look on his face "what the...?", complete with furrowed brow. I couldn't help but chuckle and when I was able to compose myself, I said "Captain, my I present Lieutenant so and so", and introduced them. His reaction was "you'll have to forgive me, we never see that uniform up here". It was a delightful experience.
A salute, fair winds and following seas to you, sir. Like I said upon my departure from the office, "it's been real".

We first met on the USCG Cutter the Mackinaw, an event with the Navy League. You were a true gentleman and delightful friend. Wishing you peace in all eternity. Thank you for your service to our great country.

Chuck has been a great friend and fellow poker player with our Bay Men’s Club group. We played regularly once or twice a month for many years and enjoyed his many stories of his days with the Coast Guard. A true gentleman and American. He will be missed but always remembered by our group each time we gather round the table. RIP Chuck!