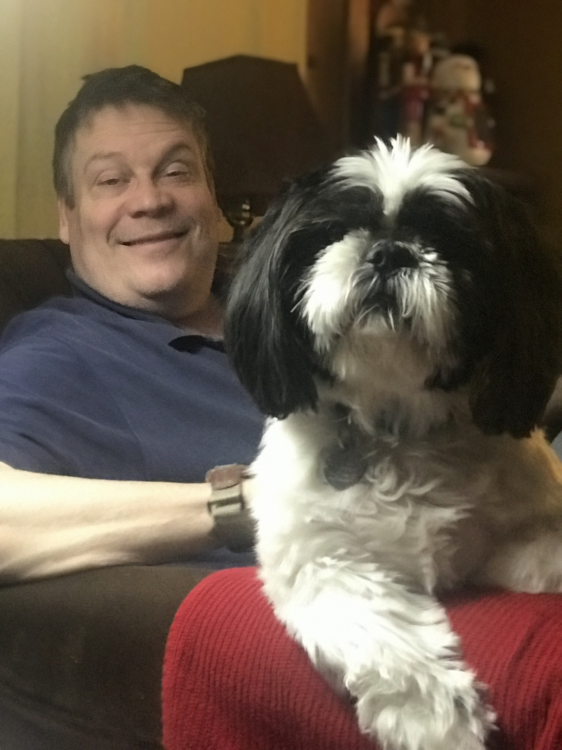 Scott Alan Johnson passed into his next journey 1/29/22. Much loved husband of Mary Jane (née Righetti) of Cleveland OH .Cherished son of the late James and Mabel Johnson of Avon OH. Brother of the late Glenn Johnson and Mary Gebben (Richard) of Uxbridge MA. Brother in law to Bobbie Johnson of Greensboro NC, Joseph Righetti and Holly Righetti of Canton OH. Most excellent Uncle to Kay Gebben, Claire Gebben (Anne),Matthew Johnson (Ferin) of Midland MI and Jenni Johnson of Greensboro NC and Great Uncle of Andrew and beloved Daddy of his fur baby Tucker.
Scott was a graduate of Bay Village High School Class of 78. He obtained an Associates Degree from Tri-C. He worked for many years at Fox 8 as a Assignment Editor and was a Emmy nominee. He worked with Dick Goddard at the Woolley Bear festivals taking pictures and also for the Dick Goddard calendars. Scott left Fox 8 to care for his Father and then most recently his Mother.
Scott also worked as a Professional Photographer and enjoyed taking nature pictures and of squirrels and had many photos published. He enjoyed showing magic tricks to younger children and was a talented cartoonist.
In 2015 Scott was a successful recipient of a Liver Kidney transplant . He was a Metal Detector enthusiast and enjoyed finding even the smallest of treasures. He had a love of the Beatles and became friends with local musicians, so much so he took up the Bass guitar like his idol Paul McCartney.

Services will be held at a later date for close family . In leu of flowers, please make a donation to your local animal shelter .

I am heartbroken. Scott was such an incredible human being. He made all of us smile with his warm and compassionate personality. Scott was such a talented photographer! I will forever cherish the photos he took and gave me of the Cleveland skyline... they are one of a kind! I am so sorry to hear this news... and Mary Jane, you are in my thoughts and prayers. I am so sorry for your loss. Rest in peace my friend Scott.... thank you for having such an impact on so many of our lives! We are better because of YOU!

Dear Mary and family. My hart is saddened by your loss. Scott had the best smile and loving way about him. May his memory always bring you joy.

So sorry for your loss Mary will keep you and your family in my prayers . If there is anything I can do please let me know. God bless kathy and vicki fischer

I had the honor of sitting next to Scott on the desk for four years. He was a terrific assignment editor, an always calm and friendly voice even on the most chaotic days, and someone who just made you smile.

I still have a few drawings he did at the desk. They made me laugh then. They make me smile today, and will always be part of my memories of him.

Dear Mary,
We are so sorry for your loss. Our hearts are very sad. Please take care of yourself.
Jeff and Holly Silcox

Our sincerest condolences, I cannot imagine the heartbreak over losing such a wonderful loving husband and friend to so many. He will always be in our prayers and know how much we loved Scott and how happy he made you.

The few times I met Scott the most memorable was your wedding meeting him. He greeted me as if we were old friends. May his love and memories be with you always my long time friend. Love and hugs

So sorry for your loss Mary praying for your strength.

Where does one begin to talk about Scott? We met over twenty years ago on a photography site along with my husband Jim! We were able to make a trip up to Ohio and meet Scott in person, when he worked for Fox, and it was insane the connection we made! He was the brother I never had (I have 5 sisters) and his sense of humor challenged mine...he usually won! After another trip to Ohio we were able to get Scott down here to Texas and I know he loved it!
So many stories so many memories so much friendship, such a great loss!
Mary was the best thing to ever happen to Scott, she was his equal! God bless you dear Mary and may you find the peace you so deserve!
Good bye Heronman (nickname from the photography site), we love you!