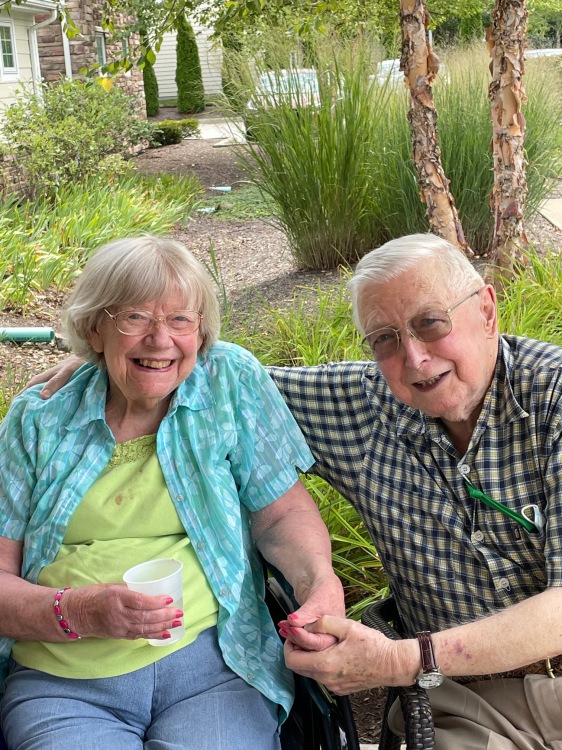 William (Bill) Welsh, age 92, peacefully passed away with family at his side on December 31 at St. Mary of the Woods in Avon.  Bill was preceded in passing byhis wife of 62 years,Caroline (nee Kracklauer) Welsh. Their love-filled marriage took them to many states that allowed Bill to pursue and expand his career interests.

Bill has heavenly joined Caroline as well as his parents, Edward and Marjorie, and his brother Richard (Dick).

Bill was very proud of his Irish ancestry, and his parents’ family legacies in Illinois and Iowa.  Bill graduated from the University of Iowa (Go Hawkeyes!), and remained a loyal fan of Iowa football and basketball for life (thank goodness for the Big 10 Network).  Immediately upon graduation from Iowa, Bill volunteered for the Air Force during the Korean War.  Bill served for several years as a Captain and navigator in an F-89 fighter-interceptor based in Alaska as the U.S. deterrent to potential hostile forces in the Bering Strait region.  After the Air Force,Bill returned to the University of Iowa for post-graduate studies.  Bill then joined Shell Oil Company, whichled to Bill’s long and successful career in corporate real estate for several different companies and industries, and Bill eventually retired from PolyOne Corporation.  Bill enjoyed a long and active retirement, including extensive travels with his beloved wife Caroline throughout the U.S., Caribbean and Ireland as well.  Bill cherished the significant amount of time he was able to spend with all of his grandchildren during retirement, and particularly enjoyed teaching them to fish (of course, Grandpa had to put the worms on the hook).  Family traditions were very important to Bill, and he started an annual tradition of a family reunion in North Myrtle Beach, which expanded over the years to include all of his grandchildren.  Bill also enjoyed serving on the finance committees at St. Ladislas church (especially the weekly meetings on Monday mornings) and at Avenbury Lakes for 25+ years, where he and Caroline made lifelong friends.

During his younger days, Bill enjoyed long walks with the family beagle (which also seemed to be a good excuse to smoke an occasional cigar).  Bill wasalso very pleased when several of his grandchildren adopted puppies, and would bring the dogs over to visit Grandpa.  Family and friends will all miss Bill’s enthusiasm for summer-time cookouts, barbequed chicken and ribs, and expansive family meals at all of the holidays.  Being kind to others was natural to Bill, and throughout his lifetime he was always seeking ways in which to help family, friends and neighbors.

A Mass of Christian Burial will be celebrated at St. Ladislas Catholic Church, 2345 Bassett Road, Westlake, Ohio on Saturday December 8 at 10:00 a.m.  The family will greet extended family and friends in the front atrium starting at 9:30 a.m.

In lieu of flowers, donations can be made in memory of Bill to the Good Shepherd Program at St. Ladislas parish.

My thoughts and prayers are offered to the family of Bill and Caroline Welsh.

Maureen, You and your family are in my thoughts and prayers. As you mourn your loss. Good Bless, Ed

Bill was a gentle person who loved his family very much. I got to know Bill from his visits each day to see his wife Caroline or Carol to me. Bill loved to tell stories and my favorite was “Bill Welsh’s Goat” which he shared with many. Bill always welcomed my hugs and I am so glad he is now with his beloved wife. Both Bill and Carol were blessings in my life.

Dad was a great father to his 4 children and fantastic grandfather to his 6 grandchildren. We will always remember family vacations to Clinton and Lacrosse and vacations to Cape Cod, Long Island Sound, Niagara Falls, Jekyll Island, Jersey Shore, Myrtle Beach, and Washington DC where we got have breakfast in the White House mess