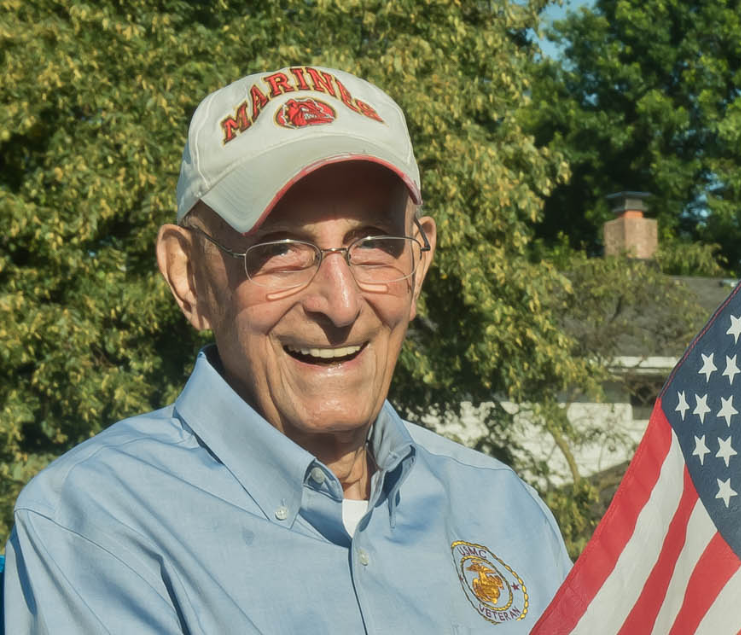 It is with great sorrow that the family of longtime Westlake resident Emory C. Crowder, Jr announces his passing peacefully at home on Monday October 18, 2021, at the age of 98.

Emory was born on September 6, 1923, in Roanoke, Virginia to Nannie Edriss and Emory Cary Crowder, graduated from William Fleming High School and attended and played football for Roanoke College.

Emory served in the Navy during WWII from 1942-1945 and was trained as a hospital corpsman to serve with the Marines in combat.  He was stationed in Tinian, Okinowa and Saipan for which he received both a Purple Heart and the prestigious Silver Star for “conspicuous gallantry and intrepidity” in battle.  Emory married his brown-eyed love of his life, Kathryn, in 1950.

Emory worked for N & W Railroad (Norfolk Southern) for over 42 years, retiring as Assistant to the General Manager in 1983.  He handled a large region and moved often with Kathryn until they settled in Westlake OH in 1968 and lived in the same home on Radcliffe Drive for 53 years.

For more than 40 years, EMORY led the Children’s 4th of July Bicycle Parade in the neighborhood and served as the unofficial community patriarch.   Emory and Kathryn faithfully contributed to family, neighbors and Church members in countless ways, demonstrating their kindness and love.

In retirement, Emory continued living life to its fullest, practicing his strong work ethic.  Extremely active in the Westlake United Methodist Church, both he and Kathryn worked tirelessly on the Church gardens as well as gardens of their own.  His tomatoes were legendary, as was their applesauce.  Married 65 years, he lost his beloved wife in 2016.

Emory was loved and revered by his fellow Navy sailors and Marines, and was the guest of honor at numerous military events including the Army / Navy game in 2019.  He always wanted to keep busy and be productive even in his 90s, astounding people by what he could do.  Watching the Indians and Browns (while sometimes hard) was an enjoyable pastime for him as wasplaying cards. His first choice though was always spending time with his loving family and multitude of dedicated friends.  He had a profound impact on the lives of those who knew him, daily demonstrating the three core values which motivated him throughout his life – his faith, his love of life and his love for people.  Knowing him changed and enriched our lives.

Family and friends will be received from 2-4 & 6-8 pm on Friday, October 22 at Jenkins Funeral Chapel, 2914 Dover Center Rd., Westlake. Celebration of Life will be held on Saturday at 11 am at Westlake United Methodist Church, 27650 Center Ridge Rd., Westlake, OH 44145. In lieu of flowers, the family suggests contributions to Westlake United Methodist Church. Masks will be required for both visitations and celebration.

I have never met anyone with Emory’s heart and soul! He sets the standard and example for us all to follow. God bless!

I met Emory in 2016 when he came into the National Museum of the Marine Corps. Because the Museum had special recognition for him, I personally escorted he and family throughout the entire building, ALL day, as I was a Docent that day. He most heartily enjoyed himself. His WWII Silver Star states he administered first aid to 15 casualties, under heavy enemy rifle fire, while wounded in the EYE. I visited him in Ohio in 2020, learning I had decorated his wife's grave in VA just a few days before he visited there; he was pleasantly awed - visiting and decorating was the VERY LEAST I could do - I made him more peaceful. God blessed us with you and your Greatest Generation!

A loss to everyone. Emery was a favorite cousin of mine.

Emory’s friendship and inclusion in our lives has truly been a gift. In just a few years Emory became a significant, positive influence on our lives. A greatest joy - every conversation over lunch, dinner, or during travels was special - when my son joined us - three guys with ages spanning many decades, sharing stories and laughter.

By amazing coincidence last year found me in Galax, Va.; a special place for Emory and now, me as well.

Emory was a wonderful soul. He will be missed by so many.

Emory is an authentic personification of why his generation was called the Greatest. He and his beloved Kathryn with their Southern charm brought such warmth and sunshine to everyone they met in NE Ohio even during the harshest of winters here on the shores of Lake Erie. He was a child of God like very few others -- Thank You Emory for enriching our lives.

I worked under Emory for a number of years. He was no non sense manager, but most of all he was fair and honest with his employees and gained their respect. A true manager.

We express our sympathy to the family. Mr. Crowder was a great friend and a wonderful person. He worked with Bonnie’s father, Bob Booth, in Williamson, WV, Columbus and Bellevue Ohio. They became great friends. I met Mr. Crowder after marrying Bonnie and beginning my railroad career. He was a wonderful mentor to me. We kept in touch and talked often. We were blessed to have him in our lives.
Andrew & Bonnie Evans

Quick witted, great letter writer. Family friend for over 60 years. Emory and Kate were part of our family, vacationing often with our parents and family.
A true Southern Gentleman. Kate, PJ and Doris welcome you.
what a great life.RIP.

Emory touched our lives in so many ways. He was like a grandfather to my son, Matt. Emory will be deeply missed but we know he is happy on heaven with his beloved wife, Kathryn and will be an Angel watching over all of us!