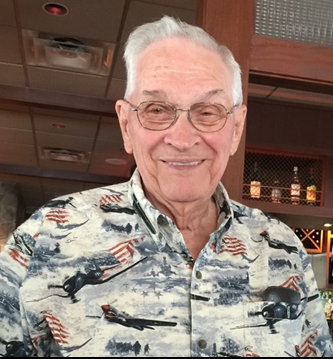 On September 29, 2021, Austin (Bud) Daniels was welcomed into his heavenly home by a sweet embrace and the cheers of multitudes. Bud is survived by his children: Craig Daniels (Kathy), Cheryl Sebjenics, Kathy Appold (Jonn), Scott Daniels, and Doug Daniels (Elisha); and preceded in death by his wife, Audrey Haine Daniels, daughter, Marilyn Monteiro, daughter-in-law Janet Daniels, and granddaughter, Chelsea Daniels.

Bud was born on January 19, 1926, in Winnipeg, Manitoba, Canada, the oldest of four children.  He grew up on College Avenue in Winnipeg.  College Avenue was the road from which all Bud’s future successes would blossom – his career, his family, and his passions.  It was here that a neighbor recognized in this young teenager an aptitude and love for building things.  He encouraged Bud to apply for an apprenticeship at The Vulcan Iron Works, one of the largest foundries in Canada.  From the beginning, Bud was successful and quickly rose to the position of Supervisor.  Bud’s experience at The Vulcan instilled in him a lifelong passion for the metal industry – solving complex engineering problems and managing a business.

Back on College Avenue, Bud met his future wife, Audrey.  As they played neighborhood games in the street, such as baseball, cricket, and tippy, he became Audrey’s biggest fan and cheerleader.  This was a trait Bud carried throughout his life – cheering on his wife, children and grandchildren in whatever they pursued.  Bud had a contagious spirit of encouragement and it was evident in his happiness at your achievement, great or small.  He looked at the bright side of any situation.  This became a hallmark of his personality.  “Wunerful, wunerful, wunerful” was one of his classic phrases – taken from one of his favorites – Lawrence Welk.   He was an avid fan of Glenn Miller, Frank Sinatra, and big band music.  Bud and Audrey loved to attend their daughter’s musical theater shows.

On November 12, 1948, Bud married his childhood sweetheart, Audrey Haine, at Salem’s Reform Church in Winnipeg.  The two embarked on a lifetime journey following Bud’s career which allowed them to live in multiple states and in England with children in tow.  They eventually settled in Bay Village, Ohio; and in 1979, Bud started his own steel fabrication business, Austin Steel & Alloy located in Olmsted Falls, OH.   Bud was particularly proud of being able to purchase a piece of equipment (an ironworker) that came directly from The Vulcan thus connecting his new business to his roots in Canada.   His business was especially meaningful because several of his children were directly involved.

When Bud wasn’t working, he participated in golf and curling leagues.  He also loved coaching his boys’ hockey leagues including the early morning trips to the ice rink where he would dazzle the young players with his killer wrist shot.  In addition, he had a passion for Indy car racing and air shows.  A true testament to Bud’s optimism was being a long-time season ticket holder for the Cleveland Indians dating all the way back to their municipal stadium days.  In recent years he became a huge BUCKEYE fan following his granddaughter’s volleyball career at The Ohio State University.

Bud had a lot of special sayings; and on the occasion of his 70th birthday his family regaled him with their favorite “BUDisms”:  “holy doodles,”  “geez murphy,”  “how aboot it,”  “busier than a one-arm paper hanger,” “the bum” (usually directed at some sports team), “a fart in a windstorm,” and “faster than a dose of salts.”  These BUDisms will affectionately remain in the family’s vocabulary.

Bud was always proud of his mental and physical health.  He had an extremely sharp mind and memory.  He could calculate mathematical problems in his head.  He could solve problems quicker in his head and on paper than others could with a calculator.  He could recall every address at which they lived and every make of car he owned and the year he owned it.  Bud loved cars, and his favorite was his 1955 Buick.  He relished washing, waxing and detailing his cars.  Piloting the family station wagon on trips to Canada was the highlight of many summers.  Bud and Audrey became U.S. Citizens in 1998.

Bud was very health conscious and stayed on a regimen of no smoking, no drinking, taking a mysterious concoction of vitamins and supplements, and starting each day with oatmeal, toast and orange juice.    He was the fastest walker and all the family had a hard time keeping up with him.

Bud had a generous heart and willingly provided help and support to those who asked – whether it be family, friends or strangers.  He literally changed the lives of those he helped -- always sympathetic and compassionate.  That warm gentle spirit is what we will dearly miss about him.  Bud made a point to personally pick out greeting cards and took great heart in finding the perfect message. It was an act of love for him, and it made us each feel special.

Even after Bud sold his business in the early 2000’s, he continued to work everyday.  He often said that when the customers wanted him to jump, he’d say, “how high?”  He always put the customer first.  On one occasion, when Audrey asked him to retire, he responded, “I am never retiring and will work till my dying day, “ and he did.   He did what he loved until the end.  In their later years, Bud and Audrey enjoyed Friday night date night going to their favorite pub in Bay Village, the Green Island. Bud’s love for Audrey was so enduring that a short two and a half weeks after Audrey’s death, he followed her to their Heavenly Home.

The Lord, our Savior, blessed our family with the best Dad ever. He was always there for us, always doing, caring, supportive and loving.  He never ever fell prey to negativism and persevered through all of life’s circumstances.  He set an example of how to live life to the fullest to all his children and those that were lucky enough to have known him.  Dad has now joined Mom, his soulmate in heaven, where our two angels for parents, Buddy and Audie, are together for eternity, and for that Lord, we are eternally grateful.

A Celebration of Life Service will be held in honor of both Austin and Audrey Daniels on Saturday, December 4, at 11:00 a.m. at Olmsted Community Church, 7853 Main Street, Olmsted Falls, OH  44138.

Sending our condolences Aunt Cheryl and family we are thinking of you. So sorry for your loss
Dave and Frank

We were saddened to hear of Aud and Buds passing - two wonderful people with lives well lived. We have so many memories of happy times spent with them - for Aud and myself (Marlene) back to childhood. For Bud as teens. Aud had such a great sense of humour, it was always fun. Our last visit with them in Canmore was a very happy one.
To the family, our sincere condolence. May your memories be some consolation - those we love are always with us.
Love. Marlene & Norm

Dear Cheryl, Craig, Kathy, Doug & Scott, I’m so sorry for the loss of your amazing Dad, and your incredible Mom. May your wonderful memories comfort you.

To :Daniels family
I am truly sorry for your loss

I know that the world changes year from year our lives day by day but the love and memories of those we’ve lost Will never pass away as long as they stay in our hearts each and every day!!
When I think of BOB I will always remember how fortunate I was that he was a part of my life I wouldn’t trade those moments for anything in the World. I hope he’s enjoying all the ozydays every minute of the day as he would say And sharing tasty caramel frappes with Audrey all day. May they rest in peace together in heaven and in our hearts Always and forever.

You will be truly missed

Daniels family, so sorry to hear of Buds passing too!, you all are in our thoughts and prayers, he was very generous to our family, he will be sadly missed! Pattie and Mark McLaughlin, Phillip and Shirley Anne Cooley

Daniels Family,
We were very saddened to hear of both Audrey and Bud’s passing. It was such an honor to have known them both. Our condolences to you all.
Friends from GreenIsland.

Dear Craig, Cheryl, Kathryn, Doug ,Scott and families,
I am deeply sorry for the loss of your Dad.
I loved his remarkable memory and the fact that he was so passionate about his job that he never retired. He had a wonderful work ethic.
He was a role model to my family and will be missed dearly.

I loved to hear the stories he told about baseball, life growing up in Winnipeg and of his family's achievements, of which he was immensely proud. Uncle Bud was truly an ambassador for the All American Girls Professional Baseball League. He was Auntie Audrey's biggest fan and promoter and we enjoyed watching him at the baseball reunions. He knew so many people and they all knew him. He was in his glory reciting dates and game statistics.

Uncle Bud always seemed invincible to me with his great energy, good health and sharp mind. But of course we all have our time and Auntie Audrey's passing left a huge void in his life that could never be filled. We rest in the comforting knowledge that they are together once again for eternity.
Sending our prayers and love to you all.
Susan & Fred

This has been a great shock to me.I just talked to Uncle Bud 2 weeks ago when he informed me that we had lost our beloved Aunty Audrey.The only comfort is that we know he is now with Audrey and Marilyn and I'm sure he is looking down at all of us.We had great times when uncle Bud and Aunty Audrey would visit in Winnipeg.The last talk we had he said he would love to come to Winnipeg again.There was always a place for him here.You will always be in my thoughts and my heart.Godspeed Uncle Bud ,and may the wind be at your back.Our love and prayers go out to all my cousins,Cherl,Katherine,Craig,Scott,Douglas and families.Rest in Peace.