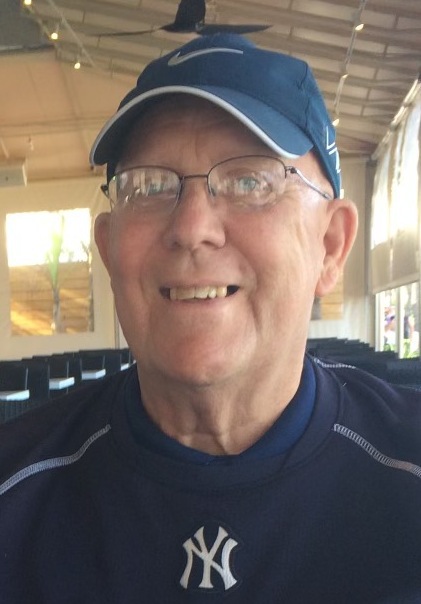 Born in Binghamton, NY on September 2, 1946 to Robert Joggerst and Ruth Dixon, Terry was a pillar of the Binghamton community for decades. He graduated in 1968 with a degree in history from Colgate University in Hamilton, NY and worked as co-owner and operator of Joggerst Printing and Stamp Company, Inc., a family business established by his grandfather Ben L. Joggerst in 1910. He was a longtime member of the Binghamton Rotary Club, served as a lector and eucharistic minister at Blessed Sacrament Parish in Johnson City, NY, and enjoyed bowling as a member of the Binghamton City Club.

A voracious reader and lifelong student of history, Terry was equally at home telling stories or debating politics in any setting, from his kitchen while serving one of his signature gourmet meals, or over a pint at the Binghamton Ancient Order of the Hibernians. He was a lover of music of any kind, the symphony and the theater. He also famously solved the New York Times crossword puzzle in ink every Sunday, without fail.

He was the beloved husband of Elizabeth (nee Kehoe, m. 1983) and the devoted father to daughter Alison Evans (Patrick), who was the light of his life and a driving force in his longtime fight against health struggles dating back to 2006. He was the cherished “DaPa” to Samantha and Gwendolyn, who inspired Terry and Elizabeth to retire and move to Cleveland, OH in 2017 in order to be closer to Alison, Patrick, and their granddaughters.

Terry was also a longtime runner and fitness buff, an avid golfer,and a die-hard fan of the Syracuse Orange, and the New York Yankees, Giants, Knicks and Rangers. He later enthusiastically adopted son-in-law Patrick’s Cleveland Cavaliers, Indians, and Browns as second teams to root for. Since moving to Cleveland, despite enduring ongoing health battles, Terry served as lector at St. Joseph’s Parish in Avon Lake, OH.

He is survived by his wife, daughter, son-in-law, and grandchildren, as well as by siblings Ben (Mary) and Margaret Haskell (Rev. Robert Haskell), and Matt and many nieces, nephews, and great-nieces and nephews. Terry’s family expresses its most heartfelt gratitude to the team of medical professionals who helped Terry over the years, including oncologist Dr. Kloss of Broome Oncology (Binghamton, NY), nephrologist Dr. Fawzyof North Coast Nephrology (Elyria, OH), as well as oncologist Dr. Haddad, internist Dr. Wang, retinal specialist Dr. Babich, pulmonologist Dr. Iqbal, and cardiologists Drs. Soltesz and Kalahsti - all of the Cleveland Clinic (Cleveland, OH).

Calling hours will be held from 4-7pm on Monday, June 28 at Jenkins Funeral Chapel, 2914 Dover Center Road, Westlake, OH. A funeral mass will be at 10am on Tuesday, June 29 at St. Joseph’s Parish, 32929 Lake Road, Avon Lake, OH. A memorial mass and celebration of life will be held in Binghamton, NY at a to-be-determined date in summer 2021. In lieu of flowers, please consider making a donation to the charity of your choice.

Dear Alison- I first met your Mom and Dad when they attended open house at Johnson City High School. They came to inquire about your progress in my Math class. It took me but a moment to understand why you were such an outstanding student. I could sense the same characteristics in your parents that now reflected in you- bright, kind, witty and so engaging. Please accept and share with your Mom my heartfelt condolences. Your Dad was, and will always remain, a very special man indeed. He will be greatly missed by so many.

Elizabeth and Alison, we are so sorry to hear about Terry's passing. He was such a kind, friendly and gentle soul. We had many great times with our Blessed Sacrament family and Terry will always be kept alive in those memories.
Our thoughts and prayers are with you.

Elizabeth, Alison & Everyone in Terry’s Family: A beautiful obituary for a beautiful person. We have been blessed to have had Terry & both of you in our lives. Terry was such a joy to be around, and until we meet again, he will continue to be in our lives through the wonderful memories he left us. He will continue to bring a smile to our faces. We thank God for Terry, and know that he is now enjoying eternal life in Heaven. You are all in our prayers. We love you.
Dennis McCabe & Sandi Distin

To Elizabeth, Alison, and family,
We will certainly miss Terry. Your friendship over the years have meant so much to us. There’s no doubt Terry and Gary are up in Heaven having a beer together, catching up, and playing some golf. We are keeping you all in our thoughts and prayers during this difficult time.

Dear Elizabeth and Alison, We are sending our deepest sympathy to you and family. Our fondest memories are the pinics at Blessed Sacrament. Since some of the men stayed all night watching the pig roast, Terry decided to make breakfast for all of the committee as we arrived early in the morning. He even offered bloody marys! It was a blessing to know such a kind and generous man. Our hearts are with you.

Dear Elizabeth, Alison and family,
We were so very sorry to hear of Terry's passing. He fought the good fight and finished the race. We have so many very happy memories of working with Terry on the Blessed Sacrament picnics over the years. Please know you are in our thoughts and prayers for comfort and peace in the coming days.

Elizabeth & Alison, Our thoughts and prayers are with you all. Terry’s smile is one we will not soon forget and his friendship to us is priceless. Fr. Kane knew what he was doing when he got us all together!

Elizabeth,Allison and family
I was so very sorry to here about terry. I know he had a lot of health issues and am so happy he got to share these past years with you and his grand kids. I will forever hold a special place in my heart for him.
Sending prayers for you all

Liz and Alison I am so sorry for your loss and grieve with you. Terry was a kind and gentle soul whom I remember fondly from my days babysitting for Alison. I pray you will find joy in the many memories you share and strength in each other and in the girls. With love, Eileen

We are so sorry to hear of Terry's death. We have so many wonderful memories of our families' years together at Blessed Sacrament. Our hearts go out to Elizabeth, Alison, and the whole family.