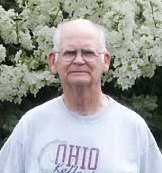 Bill R. Johnson, 81, died April 24, 2021 in Westlake, Ohio. Bill was born in West Virginia, to George and Martha Johnson. He was a long time resident of North Ridgeville, Ohio. He valued speaking his mind and making independent decisions. He worked for pay as a machinist, and for pleasure as a gardener and teller-of-tales. Mr. Johnson is survived by Beatrice Johnson, his wife of 48 years; siblings Betty Dolan, Mike Johnson, and Butch Johnson; his son, Mark Johnson; his granddaughter, Zoe Johnson; Beatrice’s daughters and sons and their spouses, Gloria Harmon, Gayle and Russ Brady, Greg and Jody Harmon, and Gary Harmon; and the Brady and Harmon grandchildren and great-grandchildren whom he thought of as his own. At his request, no service will be held.