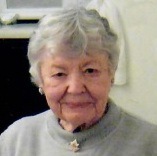 Astrid Theresia Woehler, passed away peacefully March 24, 2021 at the age of 102, after a long illness. She was born in Chicago, Illinois to Emil and Tillie Peterson. She married Elmer Woehler, while Elmer was in the US Army Air Corps (which later became the US Air Force) on February 13, 1943, and they were together 30 years until his passing in 1973.
Astrid is survived by her two daughters, Pamela Hoffmeister (Edmund) and Gail Pogue (Daniel); three grandchildren, Jennifer Phillips (Fred), David Hoffmeister, and Elizabeth Pogue (Brian Gibbons); and five great-grandchildren, Andrew, Shannon, Megan, Christian, and Emily.
She always maintained a joyful sense of humor, wonderful love for her family, unwavering faith in our Lord, and consistent kindness in all her interactions. She took care of at least seven extended family members when they were in need. While caring for them, she also attended classes at our local community college to earn a certification that allowed her to do their income taxes. Despite some hardships, our family gatherings were always joyful occasions with her contagious laugh sailing out above everyone’s voices.
As the daughter of Swedish immigrants, she was active in a Swedish-American organization called IOGT, which sponsored an annual Swedish Day picnic during the Midsummer Festival in Geneva, IL. She met her husband at the picnic, and every year, she worked in some capacity to support the organization.
Astrid and her family wish to thank the caring staff and hospice team at Clare Bridge and Skilled Nursing in Brookdale Westlake Village in Westlake, OH for all of their love and support.
Arrangements have been entrusted to Jenkins Funeral Home, Westlake, OH 44145. A private service will be held graveside in Evergreen Park, IL later this summer.
In lieu of flowers, memorial contributions may be made in memory of Astrid Woehler to Habitat for Humanity or any other organization that supports children and families

To my friend Gail and all the Woehler Family,

I offer my sympathy to you for your loss, but I know that you have wonderful memories of her. I clearly remember Mrs. Woehler's bubbling laugh and sense of humor, and her never-ending kindness.

Astrus was a delightful womanand it was a pleasure to know her.