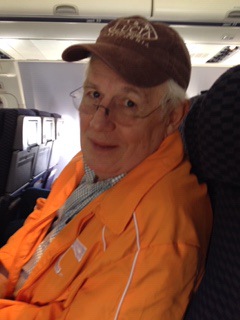 Charles "Pete" Thompson Jr. passed away on October 18 th , 2020. He is survived by his wife of 25 years, Noreen (Volchko), former spouse Linda (Human), sons Trey, Withe, Nathan (Sarah), Ben (Brad), Maribeth. Grandchildren Jenna, Taylor, Charlie, Grace, Kate, Sydney.  Pete was the son of Mary and Rev. Charles Sr. He came from humble beginnings and worked hard to provide a life for his children and family that exceeded his own upbringing .  Pete was a loving, dedicated and devoted father. He was the anchor, the mooring that kept the family together through life's trials.  Pete was also a loving grandfather, albeit intentionally and playfully contentious. He is deeply loved by his grandchildren.

The true epicenter of his life was his wife of 25 years, his beloved Noreen. The purity of their devotion was a blueprint of marital partnership. He never stopped seeing her through the eyes of a smitten youngster while she found humor in his most annoying jokes. Their love was deep, heart-felt and their fun flirtations lasted the entirety of their marriage.  Their shared love for animals included a myriad of rescued dogs over the years including Sparky, Sadie, Sam, Maya, Holly and Luna.

Time was split between family homes in Westlake, Ohio and Sunset Beach, N.C. Memories created in both over decades and into the next generations are repeatedly shared at family gatherings.  In addition to being devoted to family, Pete was also an active member of the community. He served on Westlake City Council for 9 years and dedicated much of his life in service at Dover Congregational United Church of Christ. He also spent over a decade coaching his sons’ teams through little league baseball. He retired from Eaton Corporation after 33 yrs.  An ardent supporter and fan of his alma mater, the University of Tennessee, and its athletic programs, Lady Vols basketball and Vols football were mandatory viewing.  From the entire Thompson clan...thank you, Dad. You did everything right. You’ll be missed every day.  Memorial Services will be private.

If you wish to, the family suggests donations may be made to Dover Congregational United Church of Christ, Hospice of the Western Reserve or any animal rescue group.

I will always remember Pete’s great personality and all the fun, joking jabs, that we made toward each other, lovingly. I will also remember the smiles, that Noreen put on his face. You couldn’t miss seeing the love between them. He will be missed by so many, whose lives were made better, by knowing him.

I apologize for the late post, but my deepest condolences. Haven't seen Pete and Noreen much lately, but all my memories of him are of a positive, intellectual, well thought out man. I'll always remember him for his slow draw while accurately conveying whatever it is he was speaking about. Obviously hugely respected, and my biggest sorrow is that my boy Nathan has lost his best friend. He was a great man, but fortunately I get to see him through his son. I'm sorry for your loss. Go Vols

Pete's warm southern accent and personality are two of the wonderful things I will miss. God bless

So sad to hear that Pete, my former classmate and friend from Isaac Litton, has passed away. I have fond memories of Pete. He was a fun-loving guy.
Pete was in my clsss in 8th grade at Litton Junior High when we both got in trouble for shooting rubber bands at classmates when the teacher left the room.
The family is in my prayers as you lay this special man to rest.

To Pete's Family,
We love this beautiful obituary. It describes him so well. We miss our visits with Pete and Noreen when they came to their beach house. No surprise that we met Pete at a coffee shop. He had a great outgoing personality and an obvious love for his family. He also shared his strong Faith which also drew us to them. He is in God's hands now. You are in our thoughts as you go on this journey of grief. It is so necessary but difficult. Noreen, we look forward to your next visit to Sunset Beach.

I remember when Pete joined our class in 8th grade. He was always so kind and a good student. How wonderful to read what a full and beautiful life he has had with his family and community. I am sorry for your lost but know that you are wrapped in Gods love and will have many memories.

Please accept our deepest sympathy. Know that Pete is in God's loving arms where there is no sorrow, pain, or suffering. God Bless you and your family. We love you! Steve and Cindy Mehallic

We loved spending time with Pete and Noreen at Sunset Beach. Pete always had a smile and a hug for us when we would meet there. Bob enjoyed the breakfast the "boys" would have without the gals. Lots of good memories to hold onto. We will miss Pete but we will meet again.

We love you Pete and Noreen.

We love you Pete and Noreen.

I am sorry to hear of your loss, my deepest condolences to the Thompson Family. Life continues on the other side, we will all be reunited one day.

Oh, Pete, what can I say. I didn't know you for very long, but you made a huge impact on my life. My life is better for having known you. I always thought of you as my Scarecrow as in the Wizard of Oz. I will cherish the memories of our incessant teasing of one another and I will miss your smile, words of encouragement, and bear hugs. Thank you for being my friend. Until I see you again, Pete, entertain the angels with your jokes and brighten Heaven with your smile.

Noreen,
My heart breaks for you, but I know your faith in God and your strenth will see you through. I am here should you ever need me. Thank you for putting us with us every Sunday. Lots of love and hugs to you.

To Pete's family that I never met,
Your father truly was an angel on earth. I don't know how else to describe him. Thank you for sharing him with us. You have my deepest sympathies.

Bill and I are so very very sorry to hear of Pete's passing.. He was and still is very true to our hearts. We will miss him terribly and remember with fondness his love of dogs. We had many "doggie" conversations and lots of laughs.
Love and sympathy to you all.

I'll never forget meeting Pete for the first time. I was exchanging hugs with others in the room and Pete loudly belted out: "Well Brad, I don't get a hug too?!" His warm, friendly spirit immediately drew me in. His infamous storytelling, always prefaced with "Well, I may have told you this story before..." were one of the many things I enjoyed about Pete.

I'm grateful for the time spent with Pete, Noreen and everyone in the Thompson family over the past few years. It’s clear from our time together as a family that Pete's intellect, stellar vocabulary, loud laugh and of course, good looks live on in his 4 sons. Thanks Pete for sharing your family with me. See you again someday.

Pete always wore his Orange well. There was a time when a young Tennessee graduate needed tons of mentoring to navigate the Eaton Corporation landscape. Pete was always there. The weekly phone calls to cry/celebrate Tennessee’s football fortunes became routine. Our friendship grew stronger with each call. Now, 40+ years later, it is hard to overstate how much Pete meant to me, both professionally and personally. He closed each phone call with this simple thought...”Keep the Faith.” Probably the best advice I have ever received.

It’s impossible to think of Dover Church and NOT think about Pete Thompson. He was always present in his mind and heart. A giving man who loved his community. My condolences to all who loved him.

So sorry for your loss. Sending prayers and hugs.

Sounds like a great man and father/husband/grandfather. Here’s to Pete and his life lived full of love and family.

What a compassionate, humorous, thoughtful and warm man. He will always be remembered warmly.

We missed you on earth, Pete, we'll catch up with you in the afterlife.

My sincere condolences on your loss. May your memories provide some comfort. My thoughts and prayers are with you.

We are so sorry for your loss. No one is truly lost when they remain in the hearts and minds of those who love them.

Our dear dear friend. Pete is one of a kind. We will miss you so much. The laughs and memories of the four of us on vacations and dinners together will last forever. As you requested, we will continue to make memories with Noreen and know you will always be with us. Love you dear friend..

Pete was always like the guy you always knew. I trusted him without knowing him. This man had integrity and respect and carried it graciously and generously with him. The grand daughter soccer games are rememberable to me. He’d cheer his grand daughter on sitting in his sideline chair. And chuckle over the plays. Good stuff. Good bye, Pete

What a joy Pete was. His humor smile and chuckle will always stay with me. His generous spirit that brought even outsiders in as family will be an example to look to. Thanks Pete for being such a wonderful grandfather to my granddaughters. You will be missed